Chista instrument team has good experiences in different projects
and will be so pleased to present two different types in bellow case studies.

There were 12 LPG tanks and facilities located in a tank farm and their task is collecting liquefied gases from several refineries then send for ship loading. The facilities were known as Propane & Butane Boil off and Refrigeration Plant (BOG).

LPG is remained in the tanks and stored in very low temperature. Gases are boiling and vapors slightly come up. Since increasing tank internal pressure is not allowed so boiled gases should be collected from top of the tanks and send to five compressors skids to liquefied again and send back to storage tanks. These compressors and related facilities are known as BOG.

Bellow machines and equipments were used for this project.

The most important part of the project is control system with fastest possible cycle time. 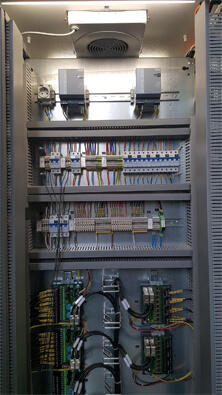 Fast loop was the most important requirement and cycle time should be less than < 100 ms as per project specification. Optimum point for cycle time was 75 ms and we could reach to 76 ms in actual condition. It is very important result in this project.

Tanks are double wall and full containment also we have to prevent overfilling by using a very high accurate tank gauging system. Since the tanks used for export also all devices should have custody transfer approval and bellow specification should be followed on this project. Tanks dimensions are 70 m diameter with 40 m height. Storage temperature is around -40°C.


The most important part of the project is control system with fastest possible cycle time.

Selecting right model of master device is the first step of tank gauging system design and the most important parameter to select master device is fluid dielectric value. It is very low for LPG and makes some problem in echo wave reflection from liquid level. Also radar has lower efficiency and it would be better to use another type.
Used tank gauging system (TGS) has been designed based on servo level transmitter and it is main master device in the system.
Measurement should be done with maximum possible accuracy to let us have total accuracy ±0.5 mm for whole package.

A supporting package was used in side of TGS to reduce overfilling risk. This package measures level only and generate three separate signals for voting by emergency shutdown system in control room. The package works by three different level transmitters, one servo type and two radar types.
As explained already about radar wave reflection and fluid dielectric value, only one device can work there well. It is radar from only one specialist manufacturer in the world.